Kaleigh Powell is no stranger to the Nauset Regional High School volleyball program. She was the coach for the freshman and junior varsity teams the past three years and served as an assistant for the varsity squad, so she had been on the sidelines for past Warriors victories.

But this one was special.

Nauset’s varsity volleyball team earned its first win of the Fall II season on March 30, a 3-2 victory at Sandwich which served as a milestone win for Powell, now in her debut season as the varsity squad’s coach.

“It was a phenomenal feeling. I’ll never forget it,” said Powell. “It was awesome to go to their school and not get those away game jitters and to get the win. They beat us the last time we played them and it went to five sets, so we really, really wanted this one. I was really happy with the team.”

It was evident that the win over the Blue Knights carried over into Nauset’s next contest, a home matchup against Nantucket on April 1. The Warriors earned victories in the first two sets — 25-23 and 25-14, respectively — before the visiting Whalers rattled off three consecutive victories, winning 25-23, 25-21 and 16-14 to win the match 3-2.

Powell said the loss is an example of the importance of maintaining focus and intensity throughout an entire match.

“I was really expecting a win,” she said. “I thought that Nauset’s boys and girls played so well, but we didn’t get it. It just goes to show you that you’ve got to keep it together for a whole game and not lose sight of what it is you need to do.”

Even in defeat, there were standout performances by Nauset. Up front, senior Lindsey Cahill was a force at the net and blocked multiple Nantucket hits in addition to recording her own points for the Warriors.

“She’s always focused and always sees the whole court — she has a great eye for that,” the coach said of Cahill.

Powell was also impressed with the play of senior Cecelia Pekarcik, who performed well after stepping into a new role as the team’s defensive specialist.

“Cecelia was phenomenal,” Powell said. “She played libero for the first time in a game at the varsity level. I think she’s a phenomenal defensive specialist player and she really stepped up to the challenge that she had to take on. She was a great leader and really set the tone for future defensive specialists.”

Among the team’s other seniors is Thor Yingling, who shares co-captain duties with Cahill and junior Olivia Horton. After watching the Warriors for a few minutes, it becomes evident that the senior is a key contributor as a setter and finisher.

Then there’s Yingling’s energy, which Powell said will be tough to replace once he leaves the program.

“Thor brings ‘Thor Energy,’” the coach said. “He’s one of a kind, irreplaceable. He’ll challenge you and push you, but he means it in the best way — for himself and the whole volleyball program. I am really going to miss his vocabulary and the way he sees the court.”

The Warriors fell to 1-6 on the season Monday night after suffering a 3-0 loss to Barnstable. Although the season has presented challenges for the team, Powell said everybody around the program is just grateful to have the opportunity to play competitive games after the fall season was postponed.

“I’m just so happy that we were able to have a season,” she said. “We’re making the best of it. It’s definitely shorter than normal seasons, but everybody stepped up to the challenge and realized that time isn’t on our side and we have to make the best out of every practice and every game and show up every day ready to play.” 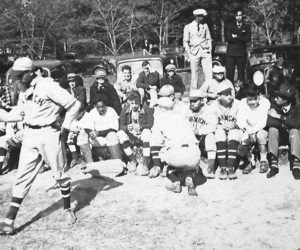