Selectman Ed McManus said he will not run for re-election and has instead taken out nomination papers for a two-year term on the newly established water/wastewater commission. CHRONICLE FILE PHOTO

HARWICH — Selectman Ed McManus will have served as a selectman for 14 years when his term ends in May and he says it’s time to change hats. He took out nomination papers this week to run for a two-year term on the new water/wastewater commission.

“I think I can be of more use concentrating on water/wastewater projects,” McManus told The Chronicle last Wednesday. “I’ve had a fair amount of experience on large construction projects. I’ve had a lot of years on the board of selectmen and I’m getting a little tired of dealing with everything in town. I’m looking to focus on a single project going forward.”

The outgoing selectman said he’d like to see a woman take his place on the board.

McManus has put a lot of time in on public service over the years. As well as serving 14 years as a selectman he was the town’s representative to the Barnstable County Assembly of Delegates for two years. He has been president of the Harwich Cranberry Festival for many years and he was the chairman of the Monomoy Regional High School Building Committee. Before moving to Harwich, McManus served in public office for 18 years in Albany, Calif., as a mayor, city councilor and on the school committee.

There will be a single two-year term and two three-year terms on the ballot as Water Commission Chairman Gary Carreiro’s term is scheduled to expire with the May town election. Carreiro also took out nomination papers last week for a three-year term on the commission. Water commissioners Allin Thompson and Judith Underwood will transition into the new commission for the remainder of their elective terms.

“I’ve got no idea why I picked the two-year term,” McManus said of the decision he made when taking out nomination papers.

The new charter provision establishing the expanded commission identifies its responsibilities as administration, maintenance and operation of the water and sewer systems and the facilities. All records, property and equipment are transferred from the water commission to the water/wastewater commission. The board of selectmen continue to be responsible for design and construction of the town sewer systems and for implementation of the comprehensive wastewater management plan.

“Technically the commission will be responsible for running the system after it is built. There is no authority in making the final decisions, it’s more in the advocacy way,” McManus said.

With McManus deciding not to seek re-election to another term on the board of selectmen, there are already two candidates who have taken out nomination papers: Mary Anderson and Thomas Sherry.

The final day for taking out nomination papers for positions on the annual town meeting ballot is Friday, March, 26. The election will be held on Tuesday, May 18. 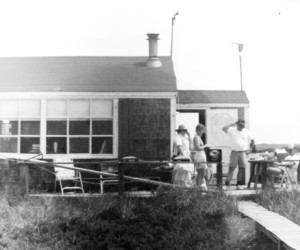