The 1,038-pound church bell is coming down soon.  Silent since 1982, it is now supported by metal hangars.   ALAN POLLOCK PHOTOS

HARWICH — From its perch high over Harwich Center, it's seen 182 years of comings and goings, pleasant summer days and hurricanes, parades and funeral processions. And for most of those years, the bell atop the First Congregational Church tolled on every sabbath, and for special occasions like the fall of Richmond during the Civil War. 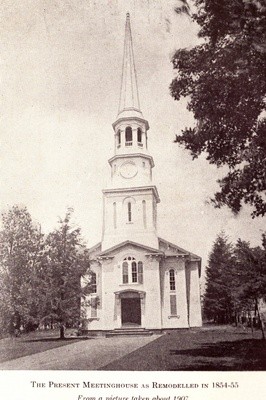 The First Congregational Church, photographed circa 1907.  The familiar clock faces were installed in 1974.

That unique piece of Harwich history will soon be on the move.

The bell, which has a fascinating history of its own, will soon be lowered by crane from the church belfry to a new permanent home at ground level, possibly as part of a display on the church lawn. Removing the bell will allow crews to replace the leaky belfry floor; during storms, water rains down on inside the lower levels of the bell tower and is caught in buckets before it can reach the parishioners below.

But the bell will remain on the ground even after the belfry is fixed, church officials say. It hasn’t functioned since 1982, when an electronic carillon took over the duty of tolling each hour.

The first meetinghouse in Harwich Center was built in 1747 and had neither a bell nor a spire, and in 1791, it was replaced with a larger structure. After just 40 years, that meetinghouse became “dilapidated and unfit for worship,” according to a history of the church published in 1997. It was sold for scrap in 1832, raising $163.50, which helped fence in the parish cemetery. Later that year, the third and current church was completed, with a low bell tower. The belfry remained empty until 1838, when the church raised sufficient funds to commission a bell.

According to historian Fran Geberth, who uncovered research by parishioner Kenneth Bernard from the early 1980s, the bell was funded in part on payments for bad debt. When the new church was built, several members had loans that were outstanding, and the notes needed to be collected. A suggestion arose that the members appropriate those notes to purchase a bell for the church, at a cost of $280.26.

The bell was cast by James Baker of Boston, and weighed 1,038 pounds upon completion. On May 17, 1838, years before the railroad would reach Harwich, the bell was loaded aboard the packet schooner Patriot and sailed from Boston to Brewster. It was unloaded and carefully carted to Harwich for installation at First Church. Together with the frame holding the bell, rope to ring it, and the transportation fees, the total project cost was a breathtaking $349.70. 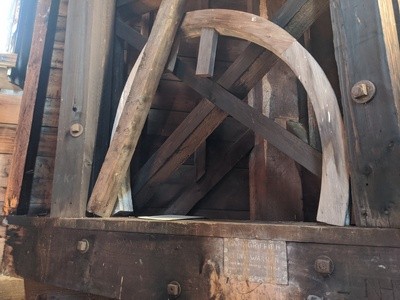 The remains of the old bell wheel, which once fastened the bell to the rope used to ring it.

No records can be found that show precisely how the massive bell was raised into place, but the timber-framed bell tower may provide a clue. With construction that resembles that of an ocean-going ship of the time, the bell tower includes diagonal members designed for stability in high winds. But to a layman’s examination, one such member appears to be missing, possibly to leave room for the bell to be hoisted through the tower and up to the belfry. Like the structure itself, the installation of the bell must have been a feat of ingenuity.

The bell sounded every Sunday for decades, and also tolled to alert townspeople of major happenings or the passing of local residents. The four-sided clock memorializes J. Burleigh Atkins, who had been a church deacon for 70 years. The mechanical clockworks were recently replaced with a modern version that self-adjusts for Daylight Savings Time.

As tricky as it was to install the bell 182 years ago, it will be almost as tricky removing it. The belfry is an octagonal space cornered by ornate pillars spaced 27 inches apart, and the bell has a diameter of 36 inches. The contractor will likely need to remove one of the pillars to reach the bell, probably installing temporary bracing to support the steeple, which rises 113 feet above the ground. 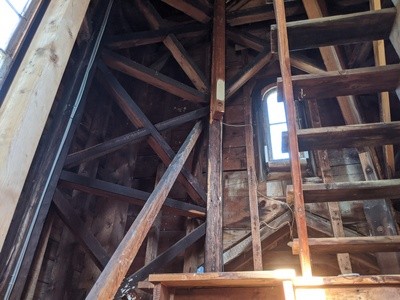 The timber frame of the bell tower.

The Rev. Dianne Arakawa said it’s not clear exactly when the work will begin, but the job is likely to get underway in the next few weeks.

Though plans are still being finalized, church leaders have talked about displaying the bell on the church lawn where it can be seen by the public, but there are no plans for it to ring again. The massive clapper was removed years ago and is stored in the church basement, and some provisions will need to be made to ensure that over-zealous visitors don’t try and ring the bell with some improvised hammer.

When the bell’s new display is complete, church officials are expected to have some sort of ceremony to mark the occasion. 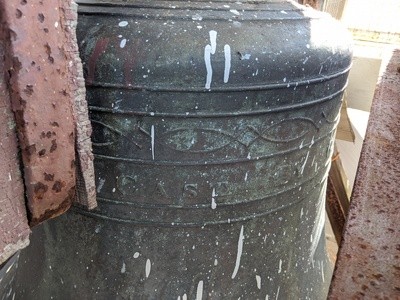 Splattered in paint, the bell still shows markings from the craftsman who cast it. 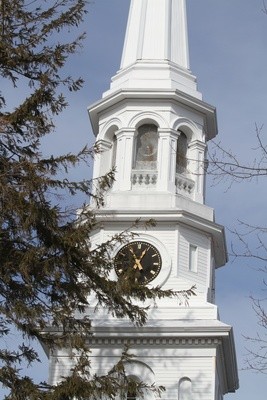 The eight-sided belfry has openings that are too narrow to accommodate the bell.

A float in the 2003 Harwich Cranberry Festival Parade marked the 50th anniversary of the Harwich Historical Society. The society’s museum was a school for many years, though it’s not clear if they actually used a dunce cap for unruly students. FILE PHOTO