CHATHAM – There might be Legos scattered about the Monomoy Regional Middle School room that houses the Robotics Club, but don't be fooled. These aren't your grandparents,' or even your parents' colorful bricks. They, and the students that use them to create working robots, are building the future one connection at a time. 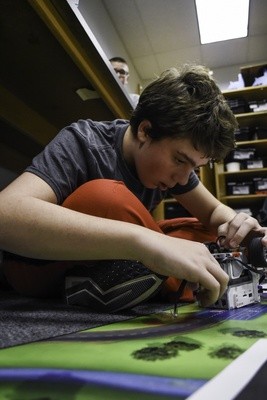 Kenny Watts makes adjustments to a Lego EV3 robot during a Robotics Club seminar and practice for the state competition.

The idea for a robotics program came from MRMS science teacher Nancy Gifford, who talked over the concept with Principal Mark Wilson three years ago. Wilson loved the idea and asked if Gifford would be willing to teach it, to which she readily agreed, with one caveat.

“I knew nothing about how to do this,” Gifford said.

No problem. After a number of kits containing Lego Mindstorms, or EV3s, were purchased, arriving near the end of the school year two years ago, Gifford set to learning all about them right along with a small group of students.

“I didn't really know what I was doing, so I learned with the kids how to build them and how to program them,” Gifford said. “I'll be honest – sometimes they know more than me.”

And so the MRMS Robotics Program was born, run since that first seminar by Gifford both before and after school, as well as during the school's seminar blocks. Many of the students in the original group are still with Gifford, and recently competed as two teams in significant tournaments, with one team making it all the way to the Eastern Mass FIRST Lego League State Championship (FIRST meaning For Inspiration and Recognition of Science and Technology) at Newton North on Dec. 14.

Though making the state championship might seem like something relatively simple, the competition was friendly but fierce and only 120 of the more than 400 teams in the state advanced. Given that it was the first year of competition for both Monomoy teams, to have one of them advance was a season highlight.

“I found out from other coaches that it is quite rare for rookie teams to make it to states,” said Gifford. 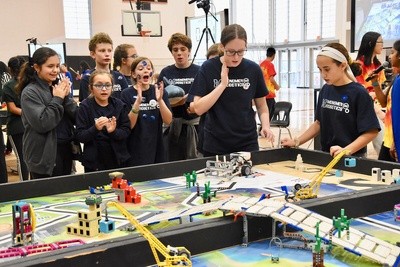 One of the two Monomoy Regional Middle School Robotics Club teams, including McKenna Carchedi, Jillian Stevenson, Charlie Jepson, Maggie Powers, Kenny Watts, Maya Jones, and Natalie Sims, watches in anticipation as their Lego EV3 robot maneuvers one of the challenges at the state competition in Newton on Dec. 14.

Not only did one of the Monomoy teams place fourth in the qualifiers at UMass Dartmouth on Dec. 8, but they also won the Inspiration Award, which, according to the FIRST website (firstinspires.org) “celebrates a team that is empowered by their FIRST Lego League experience and displays extraordinary enthusiasm and spirit.”

“It was for the core values, and the way they worked as a team,” Gifford said, adding that even though MRMS had two teams competing, they cheered for each other throughout the competition. “They were helping each other program right up to the end. What stood out to the judges was their teamwork and their spirit the whole way through. They never complained. ”

“The reason I like it is that it teaches them resilience,” Gifford said. “I tell the kids the robots are dumb and only do what they tell them to do, but they stick with it, and the way they persevere is amazing.”

The FIRST Lego League also incorporates not only the skills necessary to work with robotics, but also six core values: inclusion, discovery, teamwork, innovation, impact, and fun, with fun being a big part of what keeps kids involved.

Maya Jones joined Gifford's robotics seminar in sixth grade and enjoyed herself so much she joined the club after that.

“It's really good for friendships and building connections,” she said. “The competitions really bring us all together. We work hard no matter what team we stand by.”

Jones said that while the two MRMS teams were in competition against one another, they were essentially competing together as they offered support between teams throughout the competition. “During our judging sessions we had to talk about how we worked together, and that was the main thing that they really liked, how two teams were working together,” Jones said. 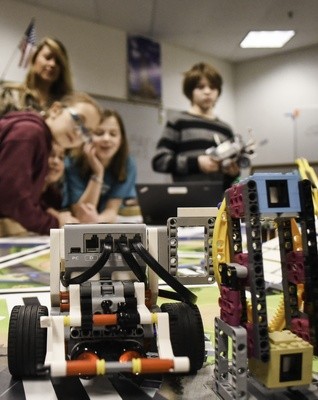 A Lego EV3 programmed by members of the MRMS Robotics Club makes its way through a practice challenge during a recent seminar block when students were preparing for the state championship.

Nolan Baker has been involved with robotics since fifth grade and said that it's always been fun.

“The fun part is when you get to program [the robots] and do fun stuff with them like the bridge or the elevator,” he said, referring to two of the challenges the teams could tackle. “I'm hoping that they make a team in high school.”

Another fan of creating a high school team is Kenny Watts, who has been working with Gifford for three years.

“She's taught me the ropes of robotics and how to use it,” he said. “I decided that [competition] was the perfect opportunity to put all that to work.”

Watts said he appreciates how club members, regardless of differences, work together as one team, programming the robots, navigating the challenges, and learning from each competitive experience.

“Lego has so many possibilities that you can basically put together any robot and put any idea into action as long as you persist enough,” he said.

Watts hopes that his involvement in the robotics program opens up bigger opportunities for him as he gets older.

“If you make it to a world championship, that's definitely something a programming colleges might look at, so it could really help you in the long run,” he said. “I'm going to see if I can get the principal to start a club at the high school so I can keep going.”

Ideally with the same amazing group of teammates.

“Our team has been working hard,” Watts said. “I wouldn't prefer any other team than this one.”