CHATHAM — Since Vietnam, the nature of warfare has changed substantially. But what it means to serve in the armed forces—the selflessness and sacrifice—remain the same.

Hank Holden, the guest speaker at Chatham’s well-attended Veterans Day observance Monday, thanked veterans and those who continue to serve in the military. “Because of you, our flag flies over the ramparts of every embassy we have around the world,” Holden said. In his years in the U.S. Air Force, Holden served around the world, and flew 180 night combat missions in Southeast Asia, earning the Distinguished Flying Cross twice.

“Today, I find it hard to identify with that 25-year-old captain who flew so many missions,” he said. When he served, Holden had little communication with loved ones other than letters sent through the mail. Today, many service members can communicate by text message, email or video chat. Pilots who served in Vietnam typically spent six months on the flight line before they had the opportunity to see loved ones, much longer than it is for many of today’s pilots.

The military today is sensitive to the risks of post-traumatic stress syndrome and takes some steps to help reduce that risk.

“We didn’t know anything about that in Vietnam,” Holden said. Many of the dangerous night reconnaissance missions he flew would today be flowed by unmanned drones. Holden said he hopes the military will keep looking at technologies that help benefit service members and their families.

“But there are some things that don’t change” about military service, Holden said. Enlisted soldiers, sailors, airmen and Marines still carry the day. Though Holden entered the Air Force as a commissioned officer, the rank-and-file members of the military “held my life in their hands” each day, he said. He will never forget those he served with, Holden added. “Yet many enlisted families have trouble making ends meet,” he said. Some have to rely on government subsidies to feed their families. “This is not right,” he said. Enlisted service members should receive more compensation, earlier in their careers, Holden said.

The sense of duty and leadership in the armed forces also remains unchanged, decades later. His squad commander led by example, never asking his men to do something he himself wouldn’t do. Over the years, Holden had many bosses in the military, and later, in the corporate world. “None of them measured up to the leadership” his squad commander provided, he said.

Dozens of people attended the Veterans Day commemoration at the community center Monday. SPC Ted Miller, U.S. Army, Ret., led the event, which included patriotic music and readings. Miller’s great-grandfather was a bugler in the Civil War, his grandfather was in the Spanish-American War, his father was in World War II, and he served in Vietnam. His son recently retired after a 20-year career in the Coast Guard.

“Sometimes we forget who our veterans are,” he said. Those who served are in all walks of life, and are friends, co-workers and family members. It is important to thank them for their service regularly, not just on Veterans Day, “to let them know their duty and sacrifice is not forgotten.”

As always, Boy Scouts were part of the observance.

Citizens cover their hearts during the National Anthem. 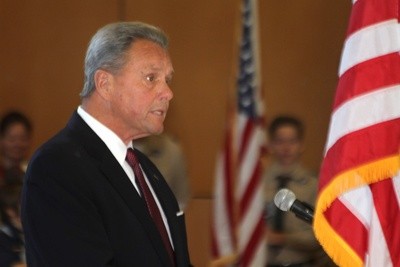 Residents stand at attention as the colors are retired.