Labor Day has come and gone. It's time for sewer construction to begin again.

A detour was in place Monday as work on the East Harwich sewer system began along Route 137. The work started at Old Queen Anne Road, while a second crew began work on Herndon Road and continued mainline sewer installation on Cemetery and Compass roads.

Both projects are aimed at reducing nitrogen loading in estuaries and waterways and are part of long range strategies to combat coastal pollution. Chatham's project has been ongoing for several years now and is slated to continue for at least 20 years. Harwich is just beginning to implement its wastewater plan, starting in East Harwich. The Route 137 infrastructure being installed will tie into sewer mains that Chatham will begin putting in place after Columbus Day. The town is waiting for final approval of the contract for that work by the state department of environmental protection, according to Natural Resources Director Robert Duncanson.

Chatham and Harwich have an agreement for sewage from East Harwich to be treated at the Chatham wastewater plant. Harwich will pay Chatham $6.7 million under an intermunicipal agreement approved in 2017.

Sewer construction, and the resulting detours, will continue along Route 137 north of the Old Queen Anne Road intersection for the next several weeks. Crews will also be installing sewers on Johanna's Path during that time.

Work in Chatham will continue along Sky Way for the next several weeks. This is part of Phase 1C 3 and 4 of the town's wastewater plan, Duncanson said, and involves sewering of streets around the Oyster Pond-Stage Harbor watershed. That phase, which covers neighborhoods north of Oyster Pond, will continue through next fall, he said. Phase 1C 5, which involved sewers on the south side of Oyster Pond, is still in the design stages, Duncanson said. 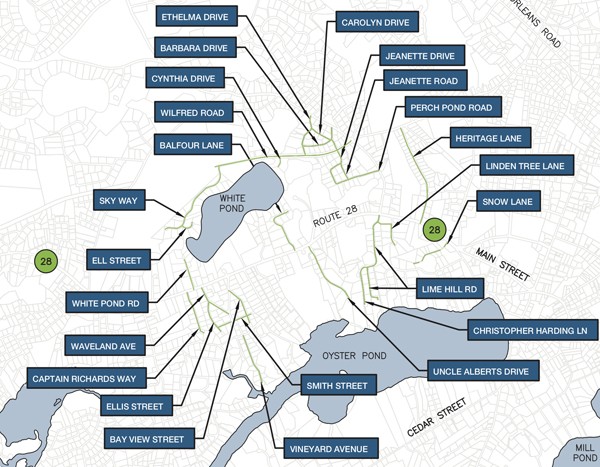 Work on sewers for the rest of Route 137 to Route 28, as well as Meetinghouse Road and Commerce Park, will go out to bid this fall, with construction expected to start in the spring, Duncanson said.

Harwich officials cautioned that the project schedule could be adjusted based on the contractor's progress and weather. Crews may also be conducting tests and other work throughout the project area.

Police details will be on hand to help direct motorists and residence will retain access. Roads will be open nights and weekends. Usual work hours at 7 a.m. to 4 p.m. Monday through Friday, weather permitting. Chatham has a website with updated schedules and weekly press releases at www.chathamscproject.info.