CHATHAM — If it comes to fruition, a part of the master plan endorsed by the airport commission calls for the town to acquire easements from 46 private properties to allow trees to be topped or removed to provide a safer approach for pilots using the airport during poor visibility.

The easements would apply to businesses on the south side of the airport near Ocean State Job Lot and several homes around George Ryder Road South, but would be more extensive on the northerly approach, where more extensive vegetative clearing would be needed at properties around Agnes Lane, Old Queen Anne Road, and North Skyline Drive. If they were obtained today, the easements and the related removal of obstructions would cost an estimated $5.2 million.

The town is in the process of revising its airport master plan, which calls for various steps to improve aircraft safety. Currently, during times of reduced visibility, planes landing at the Chatham airport are required to make a relatively dangerous circling approach to the runway, watching for visibility to improve so a landing can be attempted. Under the option chosen by the airport commission in July, the airport would seek to meet standards that allow planes to approach the runway on a more gradual descent from a considerable distance away, using GPS and other navigational technology. But that “non-precision instrument approach” requires that potential obstructions be cleared from a larger area around both ends of the runway.

At its July 29 meeting, the airport commission selected the third and most ambitious of three options for improving the runway approaches. Even the first option, which improves the area for the current practice of circling approaches, calls for the removal of vegetation on airport property and 16 private parcels, as well as one private chimney and one utility pole on George Ryder Road.

Rene Haas, a pilot and airport commissioner, said the plan chosen by the commission is the safest.

“Vertical guidance means that you are guided on a glide slope the entire way down,” he said. Compared to the current practice, “there’s just no question about the very large safety advantage,” he said.

While only a few citizens were present at the July 29 airport commission meeting, the Aug. 26 session was crowded with attendees, many of whom expressed concerns about the proposed air navigation, or “avigation” easements.

“That would be a long public process,” Commission Chairman Peter Donovan said. “That’s not something that’s going to happen behind closed doors. So I don’t think anyone needs to be too concerned about that.” 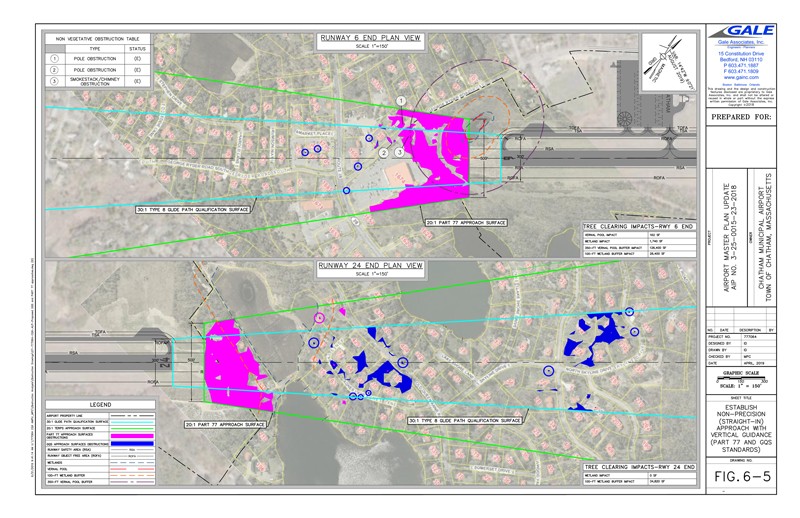 The airport approach alternative is part of one chapter of the airport’s master plan, which itself must be vetted by state and federal regulators and will be the subject of several yet-to-be-scheduled public meetings in Chatham. And if the plan is approved, there is no guarantee that the recommendations in the document will be authorized or funded.

The master plan represents a 20-year vision for the airport, consultant Matt Caron told the Aug. 26 meeting. “That’s the long-term vision,” provided that the airport had all the necessary funds and property rights. The plan does not commit the town, the state or the FAA to pay for the improvements it recommends.

Chatham Principal Projects and Operations Administrator Terry Whalen said that while portions of the plan have already been submitted to the FAA for review, the public will have an opportunity to speak out on the document as a whole.

“It still all comes back to the public as a comprehensive document for review and comment,” he said. Residents can also comment on the plan using the form on the airport commission’s page of the town website.

Lakeshore Lane resident Margaret Tompsett said she was surprised to learn that the airport commission had already chosen an option for the approach plan.

Juris Ukstins, who lives on Great Hill near the approach to Runway 24, shared that reaction.

“It is not a work in progress,” he said of the approach plan. “You folks have decided.”

Airport commissioner Huntley Harrison said the choice of Alternative 3 for the runway approaches represents a starting point, and the ultimate improvements will likely be pared down based on additional input. The current document “will get honed as we get closer and closer,” he said. “Have no fear. You’ll have your say,” Harrison said, to a response of laughter from the audience.

Though avigation easements are tailored to specific airports, the FAA provides a template for communities to use in writing them. In exchange for a fee or other consideration, the sample easement requires “the unobstructed use and passage of all types of aircraft in and through the airspace at any height or altitude above the surface of the land,” as well as the right of those aircraft to cause “noise, vibrations, fumes, deposits of dust, fuel particles (incidental to the normal operation of aircraft); fear, interference with sleep or communication, and any other effects associated with the normal operation of aircraft taking off, landing or operating in the vicinity” of the airport.

Depending on the practical applications of a given airport, an avigation easement can be written to apply to all types of aircraft, including jets, military or commercial aircraft, helicopters, or other types yet to be developed.

Under Alternative 3, the cost of obtaining easements from 46 properties on both ends of the runway would be more than $4.5 million, with an additional $660,000 for the removal of obstructions and related permits. Among other evaluations, the plan would need to undergo a National Environmental Policy Act review; together with other needed assessments, that review is expected to cost another $500,000. Most airport improvements are funded 90 percent by the federal government, 5 percent by the state, and 5 percent by the town.

Haas told the meeting that the commission’s choice of Alternative 3 “was purely based on safety considerations, not just for pilots but for those who are on the ground.” The straight-in instrument approach “provides the maximum amount of safety margin for pilots and folks who are using the airport. That was the only reason why that was chosen,” he said.

Joe Tischler, president of the group Citizens for a Safe Chatham Airport, said his organization remains focused on fighting skydiving, but they’re following the discussion about runway approaches.

“It’s clearly on our radar,” he said. Particularly if the changes allow an increase in air traffic, that's an issue that affects the entire town and should not be decided by the airport commission, Tischler said.

“I believe, for common sense, it should go to a referendum in the town,” he said.

The Chatham Municipal Airport has been under renewed public scrutiny in recent years, largely because of the debate over skydiving. Last month Citizens for a Safe Chatham Airport appealed a July 29 Barnstable Superior Court decision that dismissed the group’s legal challenge to skydiving at the airport.