CHATHAM – After a summer of keeping a watchful eye on beachgoers from Bourne to Provincetown, the Cape's lifeguards had the opportunity to show off their skills in the 45th Cape Cod Lifesaving Competition, held Aug. 2 at Harding's Beach. 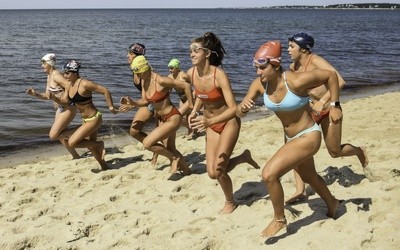 Guards from each team set out in the Iron Woman contest, one of the first events of the 45th Lifesaving Competition.  KAT SZMIT PHOTO

The surf division featured teams from the Cape Cod National Seashore, Nauset, Ogunquit, Maine, and Truro/Wellfleet, while the non-surf division included Barnstable, Chatham, Harwich, Dennis, Falmouth, and Yarmouth, all taking part in an array of events, from the Iron Man and Woman to team relays.

Though the National Seashore and Barnstable teams carried on the tradition of being the day's front runners, every team put forth a solid effort and sportsmanship ruled the event as evidenced by the friendly competition and amiable camaraderie between teams.

Nauset guard Christen Cevoli has been taking part in the annual competition for years and has been a lifeguard for 20 years, 10 at Nauset. She said she looks forward to the lifesaving competition because of the camaraderie.

“Everybody's supporting each other, cheering each other on,” Cevoli said. “It gives you something to train for at the beach besides just doing your job and doing what you need to do every day.”

Cevoli said being a lifeguard is special as it allows guards to meet and interact with people from across the world, and help them when needed. 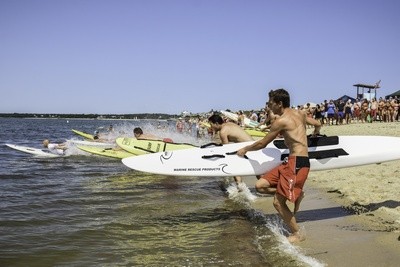 The men make a splash as they hit the water in a paddling event during the 2019 Lifesaving Competition.  KAT SZMIT PHOTO

“If that's something that's really special for you, then you feel like you're giving back all the time,” Cevoli said.

For three Harwich guards it was a family affair, with siblings Patrick, Tommy, and Kathleen O'Conner each on the team. Patrick said he enjoys the overall spirit of the event.

“It's just nice to get all the lifeguards to come together in a competitive event,” he said. “It's good spirits. We all have a good time.”

Tommy O'Conner, who served as Harwich team captain, said having his siblings on the team with him made it special. While Harwich wasn't near the top of the finishers, Tommy said the event was about more than medals.

“It's not really about winning,” he said. “We just love giving it our all and giving people something to cheer about. We have a lot of energy and are a really close unit and just like cheering each other on. When you're in last place you want to hear people chanting your name and making you feel like a champion.”

“I think it's a fun experience and a good way to keep your skills sharp,” said Kathleen. “We are capable of keeping up with the National Seashore guards, or at least doing what they do at a slower pace. We do our best and just have a fun time.” 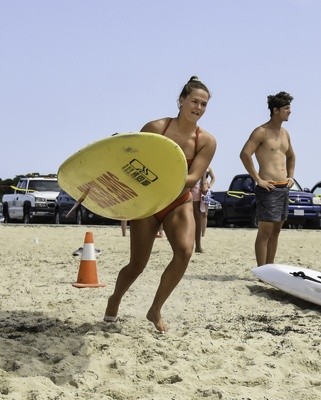 Mackenzie Cardillo of the Harwich lifeguards races toward the water during a Lifesaving Competition relay event.  KAT SZMIT PHOTO

Sue Winkfield, recreation coordinator for Chatham, said memorable moments from the event included seeing a member of the Barnstable squad cheering on a competitor from another town, and the impressive spirit shown by the Harwich and Chatham teams.

“The teams had great sportsmanship,” Winkfield said. “And it was great to see everyone cheering until the last competitor crossed the finish line.”