A Harwich firefighter monitors the spill from the north side of Sisson Road.  ALAN POLLOCK PHOTO

HARWICH – A tanker truck carrying 12,000 gallons of gasoline overturned on Sisson Road Thursday morning, releasing an estimated 4,000 gallons of fuel. The truck came to rest on its side in front of Star Market, prompting officials to close the roadway for around 16 hours during the cleanup.

The driver of the 18-wheel truck told police he swerved to avoid hitting an animal. The accident was reported at 3:45 a.m. The driver was not injured.

To reduce the risk of explosion, electrical service was initially cut to a wide area around the accident, but other areas were later restored, leaving about 200 properties without power until early Thursday evening.  Some area businesses were forced to close for the day, and a refrigerator truck was brought in to store food from the supermarket, which operating on emergency power. 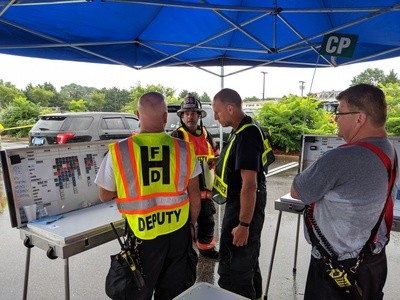 Officials say the tanker was reportedly carrying 11,500 gallons of gasoline, 8,000 of which was pumped from the overturned truck.  Around 2,000 additional gallons of gasoline were recovered from various catch basins and the tidal marsh where the storm drains empty.  It appears that the release to the environment was around 1,500 gallons.

The Harwich Water Department and the Massachusetts Department of Environmental Protection were monitoring the water supply and the nearby marsh for contamination.  The cleanup, which is expected to be lengthy, is being managed by Edge Environmental, a licensed firm hired by the owner of the fuel truck.

DPW crews initially put down a sand berm around the vehicle to contain the spill, and catch basins were blocked as quickly as possible.  The harbormaster department was monitoring the nearby marsh and creek throughout the day.  Hazardous materials crews from as far away as Onset and Wareham were brought in to help with the situation.  Multiple state and town departments were on the scene. 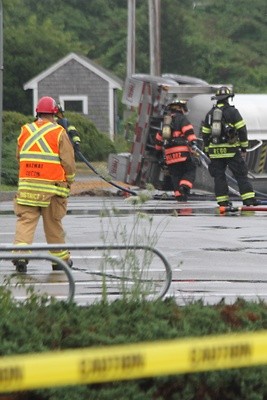 Global Remediation Services of East Taunton was brought in to offload the gasoline. 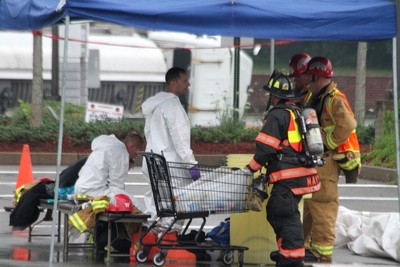 A decontamination station set up in the parking lot of Star Market.  ALAN POLLOCK PHOTO