In a tribute Tuesday morning at Strong Island Landing, a Coast Guard honor guard pays tribute to the crew of the Navy’s NC-4, whose pilot was a Coast Guard aviator. ALAN POLLOCK PHOTO

CHATHAMPORT — Before Lucky Lindy, Amelia Earhart or Howard Hughes took their places in aviation history, there was the crew of the NC-4, whose all-but-forgotten adventure began a century ago in Chatham.

“Without an exaggeration, it changed the world,” retired Coast Guard Capt. Greg Ketchen said. “To paraphrase Neil Armstrong, it was a giant leap forward for mankind.” On Tuesday, Ketchen led a small assembly at the Strong Island town landing to remember the aviators who were the first to fly across the Atlantic 100 years ago. 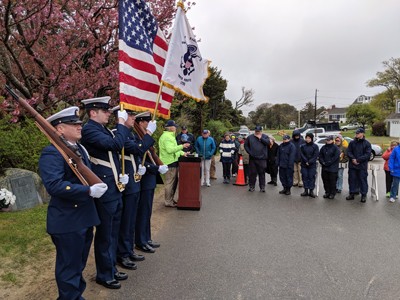 In a tribute Tuesday morning at Strong Island Landing, a Coast Guard honor guard pays tribute to the crew of the Navy’s NC-4, whose pilot was a Coast Guard aviator. ALAN POLLOCK PHOTO

In fact, many people on the Cape today are unaware that Chatham once hosted a naval air station, complete with a massive dirigible hangar, barracks and an infirmary. Now a residential neighborhood south of Strong Island Road, all that remains of the air station is a small plaque near Strong Island Landing, a few chunks of concrete, and historical records that show Chatham's footnote in aviation history.

Commissioned in 1918, the Chatham Naval Air Station was home to blimps and sea planes that patrolled the waters off southern New England in search of German submarines and other warships. It made history on July 21, 1918, when the German U-156 shelled a tug and four barges off Orleans, prompting the station to launch four aircraft to intercept. The pilots dropped several bombs on the submarine, but each failed to detonate. In frustration, one of the pilots threw a monkey wrench at the submarine.

By November, the nation was celebrating the signing of the Armistice, and the Chatham air station flew a formation of planes over a victory parade in Boston. The crew spent the next few months continuing its patrols and holding training flights. But 1919 was a big year for aviation; the U.S. Navy was ready to try and claim a 10,000-pound prize offered by the London Daily Mail for the first aviator to fly between North America and Great Britain. Though not technically eligible to receive the cash prize, the Navy was nonetheless eager to claim the honor.

Four aircraft, designed NC-1 through 4, were chosen for the mission; the N stood for Navy, and the C was short for Curtiss, the manufacturer of the biplanes known as “flying boats.” They were still somewhat experimental, and the NC-2 was withdrawn from the competition early on to serve as a source of spare parts for the others. On May 8, 1919, the three remaining planes took off from an air station on Long Island, bound for a fuel stop at Halifax, Nova Scotia. Only two made it; the NC-4 experienced engine trouble and was diverted to Chatham for repairs. That earned the airplane the nickname “The Lame Duck.”

The station’s chief mechanic, Grover Farris (father of Ron and Bill), was put in charge of the repair crew and called in George Goodspeed, Sr., for help.

“He recommended that my grandfather be called in because of his knowledge of engines,” said Goodspeed’s granddaughter, Donna Lumpkin. Goodspeed was no stranger to the air station crew; he had helped build the dirigible hangar and fixed cars for the men who were stationed at the base. He helped remove the center engine, replacing it with a spare, and helped overhaul the center rear-facing “push” engine “so that it could make it to Nova Scotia for more parts and gas,” Lumpkin said.

With the repairs complete and tested, the NC-4 left Chatham on May 14 to meet up with its two sister planes in Newfoundland the following day. The three aircraft left Newfoundland late in the afternoon of May 16 for the next fuel stop in the Azores, but the NC-1 and NC-3 encountered heavy fog that caused navigational problems. They landed on the open ocean, which caused them significant damage that took them out of the competition.

But the Lame Duck stayed its course and continued to the Azores and then Portugal, reaching Plymouth, England, on May 31. The NC-4’s odyssey was international news in 1919, but is mostly forgotten history today.

“I knew about it because my father’s sister was engaged to a pilot down there,” local historian Dave Crocker said. Crocker will be leading a lecture at the Chatham Historical Society’s Atwood House and Museum on May 19 at 2 p.m., helping to launch their new exhibit on the NC-4. “This pilot, Edwin Mott, was from Brooklyn, N.Y., and his mother caught the flu, which was going around at the time,” Crocker said. His aunt traveled to Brooklyn to nurse the woman back to health, but instead contracted the flu herself and died. “It was devastating to the family,” he said.

The transatlantic mission was led by Lieut. Cmdr. Albert Read, the navigator, and U.S. Coast Guard Lieut. Elmer Stone, the pilot. They were joined by co-pilot Walter Hinton, engineering officer James Breese and engineer Eugene Rhoads. To Crocker, the most compelling part of the NC-4 story is that of the radio officer, Ensign Herbert Rodd.

“He was passionate about the radio,” which was still a new technology, Crocker said. The radios at the time were “pretty primitive,” and were prone to interference from other devices that caused sparks, like the spark plugs in the engines. “You can imagine 12 cylinders right above your head,” he said. “It was a major problem.” If not for Rodd’s superior radio skills, “I don’t think they would’ve made it,” he said. Also, the engines the NC-4 received in Chatham made the plane more powerful than its sisters, “so it was always ahead of the other two,” Crocker said.

As the first plane to cross the Atlantic Ocean, the NC-4 was shipped back to the U.S. on a freighter and was sent on nationwide tour as part of a Navy recruitment drive. It eventually found its home at the Naval Air Museum in Pensacola, Fla., where it remains on display.

On Tuesday, 100 years to the hour after the NC-4 taxied out through Strong Island Channel and started its famous voyage, volunteers with the Coast Guard Heritage Museum in Barnstable held an observance at the town landing. A planned Coast Guard aircraft fly-by was canceled because of the low clouds and drizzle. It was similar weather in 1919 that delayed the NC-4’s departure from Chatham by several days, Ketchen observed. The group held a moment of silence in honor of the aviators, and acknowledged Crocker, Lumpkin and other locals who came out to mark the occasion.

“This is something that we, as Cape Codders, should be very proud of,” he said.