This illustration shows areas where waterfowl hunting will be allowed (west of South Monomoy Island); and the crosshatch represents areas closed to coyote hunting. US FISH AND WILDLIFE SERVICE MAP

CHATHAM – Under a new U.S. Fish and Wildlife Service plan, hunting could be allowed on the Monomoy National Wildlife Refuge for the first time since it was established in 1944.

In a draft hunting plan released last week, the agency is proposing allowing hunting of migratory waterfowl and coyotes. Fish and Wildlife Service officials will hold an information session on the proposal on April 30 at the community center.

Under the plan, hunting for both coyotes and waterfowl will follow Massachusetts laws and regulations as well as seasons, with the exception of the coyote hunting season, said Refuge Manager Matt Hillman. The Massachusetts coyote hunting season begins in October, but because some shorebird management and research activities on the island are still going on at that time, coyote hunting on the refuge won't be allowed until November and will end March 1. Coyote hunting also will not be allowed when seal researchers are on the island, and will be prohibited at all times in areas along the eastern shore where gray seals haul out.

Hillman said hunting was proposed in the 2016 refuge's comprehensive conservation plan and is in line with the Department of the Interior's policy of opening additional public lands to recreational opportunities. Activities are deemed to be prohibited on the refuge unless specifically allowed following a finding that the activity is compatible with the mission of the refuge, he added. The draft hunting plan includes a compatibility determination, as well as an environmental assessment, which finds the use compatible with Monomoy's mission. 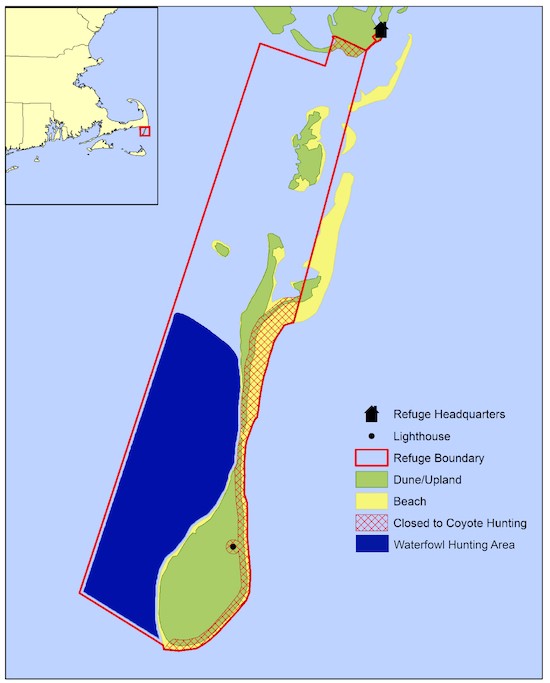 This illustration shows areas where waterfowl hunting will be allowed (west of South Monomoy Island); and the crosshatch represents areas closed to coyote hunting. US FISH AND WILDLIFE SERVICE MAP

Hunting is one of the wildlife-dependent uses that receive “enhanced consideration” under the Refuge System Improvement Act of 1997, according to the draft plan, along with fish, wildlife observation and photography, environmental education and interpretation. Monomoy is current open to five of the six uses. That and other laws and policies permit hunting on a national wildlife refuge when compatible with the refuge's purpose. Monomoy's mission is the management and protection of migratory birds.

Hillman anticipates opposition to the coyote hunting proposal. There was considerable opposition to the activity at a recent meeting in West Barnstable held by the state division of marine fisheries and wildlife in reaction to a coyote killing contest sponsored by Hyannis gun shop. The Monomoy proposal is different, however, said State Senator Julian Cyr, D-Truro, because it involves a remote location and dovetails with the goal of controlling the island's predator population.

“It might be pretty limited,” Cyr said. And while he's not enthusiastic about the proposal, he said it “seems consistent with other practices and hunting that is allowed on other preserved land on Cape Cod,” including limited hunting at the Cape Cod National Seashore. He added that he would be eager to hear the public reaction to the Monomoy proposal.

Chairman of Selectmen Dean Nicastro said Monday that he's not yet heard any concerns about the proposal from town staff or the public. If it appears appropriate for the selectmen to weigh in on the proposal, it could be added to the board's May 6 agenda, he said.

Coyotes were first recorded on the refuge in 1996. Because they prey on shorebirds, especially when they have pups, the refuge has conducted lethal coyote removal since 1998. In the past few years, two to four adults have been killed in the spring, Hillman said, to prevent them from creatingdens; more are sometimes taken over the course of the season to protect the tern colony and plover nesting areas. Last year four coyotes were removed by personnel from the U.S. Department of Agriculture's Animal and Plant Health Inspection Service, who spent 40 days on the island in the spring.

It would be very difficult to eradicate coyotes from the refuge, Hillman. They are strong swimmers and easily cross the water between the mainland and the island, where they have learned there is a ready food supply. Recent shoaling has made that even easier. The refuge's goal is to keep the predators from becoming residents of the island by preventing the establishment of dens.

Allowing coyote hunting on the island is not meant to take the place of or supplement the refuge's predator management program, he said, although it may support its goals. Coyotes are part of the island's ecosystem and help keep in check the population of smaller predators such as fox and raccoon, which also prey on shorebirds. Predator management, however, is an important tool in managing the shorebirds that nest on Monomoy, including the protected roseate terns and piping plovers, a federal threatened species.

“There's a lot of challenges associated with accessing these islands,” he said. Coyotes are notoriously difficult to hunt, he added, especially in the open upland of Monomoy, where they tend to blend into the landscape. Hunting will also not be allowed at night.

Monomoy, which hosts the largest common tern nesting colony on the eastern seaboard, was well-known for waterfowl hunting prior to its establishment as a wildlife refuge, Hillman said. According to the draft report, the Monomoy Brant Club was established near Inward Point in 1862; Atlantic brant hunting continued each spring through 1909, when spring hunting was abolished. Waterfowl hunting continues today in Chatham, even around Monomoy, and Hillman said it's likely that hunters sometimes stray over the refuge board when hunting in the waters west of the island.

Hunting of ducks, geese and coots will be allowed on open waters between the southern portion of South Monomoy Island and the administrative boundary to the west, which stretches into Nantucket Sound about a half mile at the southern tip to 1.5 miles at the island's narrowest point. The area encompasses approximately 3,080 acres, according to the draft hunt plan. Waterfowl hunting now occurs in town and state waters near the refuge, and the plan acknowledges that hunters probably stray across the refuge boundary.

The report projects 116 waterfowl hunting trips per year and four to five visits for coyote hunting on the refuge. An estimated 232 birds are expected to be taken annually. Only one coyote a year is likely to be taken.

Enforcement will be by U.S. Fish and Wildlife officers and state environmental police. Commercial hunting guides will be required to obtain a special use permit and pay a fee, and coyote hunters will be asked to check in at the refuge office to determine if seal research is being conducted on the island. Anyone hunting within the refuge must have the required state and federal permits, licenses and stamps and comply with all regulations, Hillman said.

The town and state continue to dispute the western boundary of the refuge, claiming that it should be low water, not the administrative boundary in Nantucket Sound. Hillman said any change in the boundary will not impact the hunting program, since it follows existing state regulations.

The program is expected to cost $22,500 to set up, including preparation of documents and signs as well as staff time. The annual cost of the hunting program is projected at $5,150. According to the report, the costs will be absorbed by the refuge's operating budget.

The April 30 public information session will be held in the large meeting room at the community center from 3 to 6 p.m. Fish and wildlife staff will be on hand to explain the plan, answer questions and receive comments. Hillman said comments received at the public information session and in writing will be reviewed before the plan is finalized. The comment period closes May 10. Officials hope to implement the plan in the fall, he said. Comments can be sent by email to r5rw_mnwr@fws.gov, or to Hunt Plan, Monomoy NWR, 30 Wikis Way, Chatham, MA 02633.

The draft hunt plan, compatibility determinations and environmental assessments are available on the refuge website, www.fws.gov/refuge/Monomoy.