CHATHAM – Crews began prep work for the West Chatham Roadway Project this week, and right in the middle of the section of Route 28 that's being upgraded, another crew was working on a different kind of upgrading project.

A half dozen members of the Barnstable County AmeriCorps group were assisting town conservation staff in creating a meadow at the Captain George Harding Conservation Area, directly across the street from the Shop Ahoy Plaza. Projected in the management plan for the nearly two-acre property the town purchased in 2004, the meadow will be dotted with bluebird houses to attract eastern bluebirds.

Invasive species such as honeysuckle and bittersweet were removed from the lot, and the large flat area adjacent to Main Street was mown down to create the meadow environment. Along with the birds, the meadow habitat attracts other wildlife such as deer, vole, rabbits and other avian species such as raptors, said Assistant Conservation Agent Paul Wightman. He added that development has severely reduced meadow environments on the Cape. It will be cut back about once a year to maintain the meadow habitat. 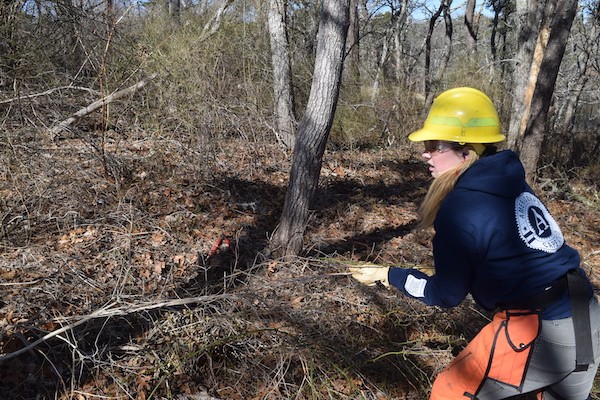 A walking trail will be created leading to Bearse's Pond at the rear of the property, and a bench will be installed overlooking the water. Wightman said Agway provided a discount on the bench, and the Birdwatchers General Store in Orleans gave the town a good deal on the bluebird houses.

A new sign has also been created relating the history of Harding, a schooner captain who was also the master of the Nantucket Lightship. After retiring from the Lightship Service in 1935, he lived in the family home at 1568 Main St. until his death in 1943. Captain Harding's granddaughter, Linda Hennigan, and her daughter, Sarah Ostergaard, helped design the new sign.

Wightman said with a new fence and sign, the conservation area serve as a focal point for the West Chatham neighborhood center, particularly after the West Chatham Roadway Project adds new sidewalks and landscaping along Main Street.

A gathering at Hawksnest,1940. PHOTO COURTESY OF KAITLIN LAPHAM