A detachment of the Third U.S. Infantry Regiment, known as the Old Guard.  COURTESY PHOTO

CHATHAM — When the state funeral was held for President George H.W. Bush recently, a man with Chatham roots helped provide a proper military tribute. Carlton Eldridge serves with the U.S. Army as part of the Third U.S. Infantry Regiment, known as the Old Guard; one of the unit's key duties is to fire artillery salutes at funerals.

“We fired a 21-gun salute for his state funeral,” Eldridge said. “The last state funeral happened in 2006, 12 years ago. To be able to be a part of something like this is extremely special.” The Presidential Salute Battery consists of 10 105-millimeter howitzers, the kind used in World War II. Only 12 remain, Eldridge said. 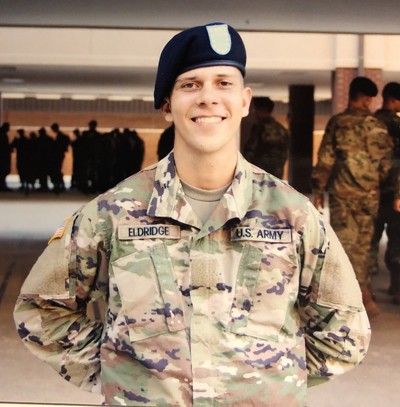 “It is an extremely high honor to be a part of a ceremony like this. It only comes around once in a while, and it has to be...absolutely perfect,” he said. “Guns are set up and they fire a round every five seconds until they hit 21. A 21-gun salute is the highest honor anyone can receive in the nation, and it’s a very rare and special occasion,” Eldridge said.

Born on the Cape in 1996, and a member of the first graduating class of Monomoy High School in 2015, Eldridge has been in the U.S. Army for a year and a half.

“When I was a boy, my father used to tell me and my brother stories about his time in service and all the places he had been, like Germany and Hawaii,” he said. The stories sparked something in him.

“It gave me the desire to want to travel the world and see the world. But it wasn’t just my father, it was my family,” Eldridge said. As he got older, he learned just how many of his family members had served in the military.

“Both of my grandfathers served, as well as my great uncle, in World War II, Korea and Vietnam. My mother’s cousin is in the Navy, and my cousin is in the Air Force,” he said. Enlisting was something Eldridge could do to give back to his country and to honor his relatives’ service as well. Fewer than 1 percent of Americans enlist in the armed forces each year, Eldridge noted.

“I found out about how much my family had actually given for this country, and I wanted to do my part,” he said.

Serving in the Presidential Salute Battery is an excellent assignment, Eldridge said.

There is a complex protocol for artillery salutes. While a 50-gun salute is sometimes fired on Independence Day, with each volley representing a state in the union, the highest honor is a 21-gun salute, which is reserved for presidents and chiefs of state. Salutes with fewer volleys are given to lower-ranking dignitaries, from the vice president, who is entitled to a 19-gun salute, to a vice-consul or consular agents, who get just five.

When Eldridge has finished his service in the Army, he’ll find a new use for his attention to detail and military precision.

“For my future career, I’m hoping to get into the secret service as well as law enforcement,” he said. “I will also be a part of the Army reserves and continue my service to my country, just as my family has done.”

Until then, he’ll continue to hone his skills with the Old Guard. The ceremonial nature of the work makes it particularly difficult, Eldridge said.

“There’s times where you can be standing still and not move for hours before actually firing,” he said. Often, the work is done entirely in the public eye.

“Everything has to be right into a precise point,” Eldridge said. “Everyone has to move at the same time.”

Adding to the pressure is the knowledge that the salute is an important gesture.

“It’s a very, very meaningful experience. You want to leave the best impression on the people you’re performing the ceremony for.” These salutes are often the last ones given to people who served their country, he noted. “I truly believe it leaves a mark on the families, as well as the nation.”