CHATHAM — Searching for that Goldilocks spot that has adequate parking and a convenient location, selectmen Monday reviewed four potential sites for a new senior center. The spots – off Middle Road, near Volunteer Park, behind the community center and on the Stony Hill Road site of the current center – each have pluses and minuses.

Ahead of a planned decision on Nov. 26, selectmen heard analysis by architect Joel Bargmann, hired by the town to find a location for a new council on aging building. The current facility is cramped, poorly designed and lacks adequate program spaces, town officials say. While a building of 12,000 or even 10,000 square feet is possible, Bargmann used the assumption of a 14,000-square-foot, two-story facility, as recommended by a space needs assessment done by the architect last year. A building of that size would require between 70 and 80 parking spaces, he said.

Bargmann first reviewed the options for rebuilding on the existing, 27,000-square-foot senior center site. A new two-story building would almost double the current number of parking spaces to 44, but would still have far fewer than needed, he said. If the new facility had a basement parking garage, that would bring the site total to 66, he noted. A third option would involve moving the building to the right of its current location, then building a two-level parking structure that could accommodate all the needed spaces. Viewed from Stony Hill Road, the parking structure would look like an ordinary parking lot, with a second level hidden underneath.

The parking structure would be expensive – up to $30,000 per space – and might impinge on a neighboring boatyard, Bargmann said. 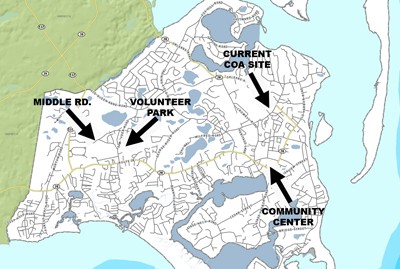 Next, Bargmann reviewed several configurations of a new senior center on the land behind the community center.

“I know there’s some concern about the Little League field, but we’re just trying to show you the options,” he said. By building the senior center or its parking on that field, up to 212 parking spaces could be created, to be shared by the senior center and community center.

Several selectmen rejected the idea of disturbing the field. At a time when the town is focused on attracting and retaining young families, plowing the field under would be counterproductive, board Chairman Dean Nicastro said.

“I think it sends a bad message,” he said.

But Bargmann showed one configuration that would allow the new council on aging building to be kept close to the existing community center, connected by a breezeway, while still creating 145 shared parking spaces. The plan would retain the Little League field, but would use up the grassy area behind the community center where summer recreation programs are often held. Bargmann said that boosting the number of shared parking spaces by just 55 would likely be adequate for both the community center and the senior center, given their differing program schedules.

The next site considered was a town-owned parcel on Middle Road in West Chatham, just north of the wastewater treatment plant. While it is remote from downtown Chatham, the site is more than large enough for parking and to allow the senior center to be built on a single level. Bargmann said most communities now prefer two-story senior centers because they are more energy efficient and look less institutional.

The final location is a portion of the land north of Volunteer Park, off Sam Ryder Road near the transfer station. The undeveloped land also has adequate space for parking and different building configurations, and the park's athletic fields pose opportunities for senior fitness activities and inter-generational programs. But the land has an additional challenge beyond its relatively remote location. Because it was purchased for conservation, using it for a senior center would require special approval from town meeting, a vote of the state legislature, and a trade-off by the town to convert other parcels to conservation land. The legal complications would be substantial but not necessarily insurmountable, Principal Planner and Operations Administrator Terry Whalen said.

“I think we’re wise for looking at town-owned properties,” Selectman Cory Metters said. After the board solicited proposals from private property owners, they decided that using land already owned by the town would be more affordable.

Board member Jeffrey Dykens said the options are interesting, but any re-use of the existing Stony Hill Road site would be challenging. It would not only require finding temporary quarters for the senior center during construction, but the final product would be a bit too large for the land, he said.

“I feel like we’re putting a size 9 foot into a size 7 shoe,” Dykens said.

Selectman Shareen Davis said she has concerns about each of the locations, including Volunteer Park. “This is quite a residential area,” she said, and the undeveloped land is one of the town’s few remaining wooded tracts. “The area back there is extremely pristine,” she said. Using land behind the community center – without disturbing the Little League field – has key advantages, she added.

“I’m in favor of seeing people of different generations being together in one setting,” Davis said.

“We could use those proceeds to help fund the construction cost of a new senior center,” he said.

The board of selectmen will take up the review again on Nov. 26.

“That’s when we’re going to make a decision on the sites, and as you can see, it isn’t an easy choice,” Nicastro said. Anyone with additional comments is encouraged to email the town manager.