Monomoy's Jack Fernandes finds himself surrounded by members of the Harlem Wizards during his time in the game, a fundraiser for the Monomoy High Class of 2022. Kat Szmit Photo

HARWICH – They came, they dribbled, they dunked, and they danced, and when all was said and done the Harlem Wizards held one slamtastic fundraising event at Monomoy Regional High School on Oct. 17, all to benefit the Class of 2022. 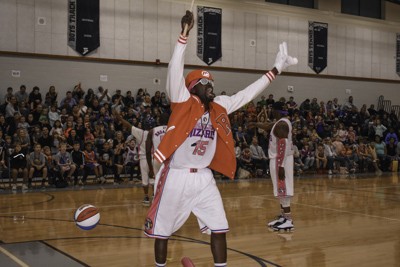 A Mario-costumed Loonatik (Lloyd Clinton) gets fans into the fun during the Harlem Wizards fundraiser Oct. 17 at Monomoy High.

It's been a couple of years since the slam-dunking superstars have graced the courts at MRHS, but 2018 marked their spirited return, with the Broadway Unit, featuring Broadway, A-Train, Livewire, Loonatik, Space Jam, and Werm, taking on the Monomoy All-Stars, a stalwart team of teachers and students.

The Wizards are a group of show basketballers that got their start in 1962 and have since become one of the most popular fundraising groups around. According to their website (harlemwizards.com) the various Wizards teams traveled to more than 400 communities across the U.S. and helped raise more than $2 million.

For nearly two solid hours, the high-flying, trick-shooting Wizards wowed the crowd with their mad skills in a show infused with lots of laughs, a little basketball, and, as always, plenty of dancing. The event, sponsored by a host of local businesses, was held to raise funds to benefit the Class of 22 and will help defray costs of upcoming trips and events, including their eventual prom. 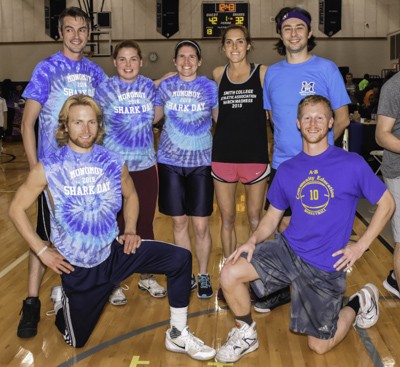 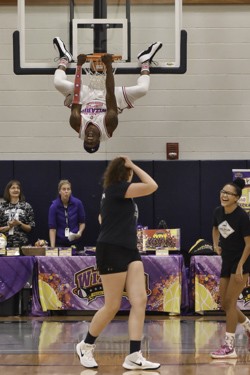 Space Jam's antics get Monomoy High's Erin Starkey and Aleidy Rodriguez laughing, and impress the folks at the merchandise table. 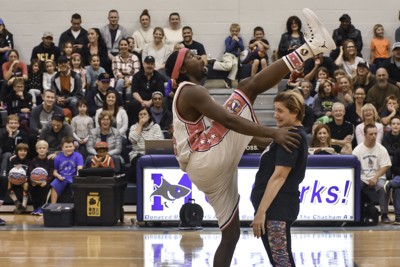 Loonatik gets a leg up (and then some) on Harwich Elementary School teacher Katie Carey as the Harlem Wizards game gets under way at MRHS on Oct. 17. 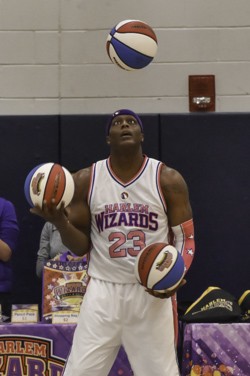