A 120-by-50-foot section of revetment on Gerald Milden's property failed in March. He claims dredging in Aunt Lydia's Cove in April 2017 changed tidal currents in the area and led to undermining of the wall. COURTESY PHOTO

CHATHAM – Claiming that dredging in Aunt Lydia's Cove last year contributed to damage to his revetment this past winter, a Minister's Point property owner is threatening to block the town's plan to clear shoals from the North Inlet.

Gerald Milden is asking that before emergency dredging is done across Chatham Harbor from his home, the town conduct a study to determine potential impacts on the inner shoreline.

With shoaling making navigation through the inlet opposite Chatham Light all but impossible, much of the town's fishing fleet, as well as the Coast Guard, is now using the North Inlet, which broke through in 2007, to access the Atlantic. Shoals on the southwest side of the inlet, however, make the waterways hazardous at low tide.

“There are certain times we cannot cross the cut because of the depth,” said Coast Guard Senior Chief Boatswain's Mate Carlos Hessler.

The town wants to remove the shoals, but that area is not covered by existing dredging permits. Officials have been working with the state, the Army Corps of Engineers and even the office of Congressman William Keating to facilitate emergency permits so that the Barnstable County dredge, which is currently finishing up work in Mill Creek, can swing over to Chatham Harbor and perform the work within the next couple of weeks.

“I think we have the support we need to pursue it,” Coastal Resources Director Ted Keon told members of the waterways advisory committee last week regarding the emergency permit.

Further discussion of the matter was cut short by Selectman Cory Metters, however, who said the threat by Milden to block the dredging means litigation is a possibility and therefore the subject could not be discussed in public session.

When asked for an update on the permit situation on Tuesday, Keon and other town officials said they could not comment further due to the potential for litigation.

In a statement sent to The Chronicle Monday, Milden said “multiple” property owners in the neighborhood want no further dredging “until the unintended consequences resulting from the April 2017 dredging of Aunt Lydia's Cove are fully addressed.”

“We also wish to be assured that any new projects will be the subject of an impact study so we understand beforehand the effects it will have on the Pleasant Bay/Chatham Harbor shoreline from North Chatham's Cotchpinicut Beach to Lighthouse Beach,” he wrote.

“Obviously it is in everyone's interest to resolve this unfortunate matter in a manner that addresses all the affected parties including the Coast Guard, recreational and commercial boaters and property owners,” Milden wrote.

Milden assembled a 27-page report, endorsed by nine other property owners in the Minister's Point, Old Wharf Road and Linnell Lane area, which posits the theory that dredging in Aunt Lydia's Cove in April of last year and the town's failure to follow through on plans for additional dredging from Minister's Point to Strong Island were largely responsible for the failure of his revetment on March 2, not the major nor'easter that struck the coast that day.  The report is titled "North Chatham's Newly Rearranged Shoreline Including the Man-made Destruction of the Linnell Ln/Old Wharf Rd Marsh, The Salt Pond and a Minister's Point Revetment."

The report, which does not cite any engineering or hydrogeological studies, claims that dredging in Aunt Lydia's Cove, south of Minister's Point, increased the speed of the current in the area. This created a “surge current” along the shoreline in North Chatham, which includes Minister's Point, and the collision of that current with the east-west tides flowing through the inlet caused rip tides and turbulence which creates eddies that have undermined the revetments at the tip of Minister's Point. It is those currents that caused the collapse of a 120-by-50-foot section of Milden's revetment on March 2, his report alleges, dislodging “Volkswagen-size” stones that were previously eight feet below the ground at the base of the main revetment.

That wouldn't have happened if the town had followed through with plans to do further dredging from just south of Minister's Point, between the mainland and Strong Island and into Pleasant Bay, the report alleges.

The crater was just 25 feet from his bedroom, Milden wrote in the report. He didn't hear the rocks sliding because of the high winds from that evening's nor'easter.

“But had the winds been fiercer or the tidal surge a little higher,” he wrote, he would have been “washed out to sea.”

“The ill-fated 2017 dredging of the cove dramatically changed the bay and harbor's temperament,” the report reads. “It disturbed the natural flow patterns and geological processes that were created by the North Inlet when it opened” in 2007. If the situation is not changed, he alleges, Minister's Point could wash away and take many of the homes behind it with it.

The report also alleges that sand from the dredging operation, which Linnell Lane residents paid $167,500 to replenish their beach, was piled too high. During the winter storms, it acted like a berm, not allowing seawater that had washed over into the salt pond to escape, the report claims. This cut off tidal flow into the marsh and pond and led to stagnated water and rotting vegetation, according to the report.

The solution, the report states, is to complete the original dredging plan to redirect what it claims is the shoreline surge away from Minister's Point. Sand from the dredging should be used to reinforce the damaged revetment foundations and fill in a large trench scoured out immediately seaward. This will “buy property owners time to devise a permanent solution.” The report suggests that can be done by the county dredge in August.

At last Thursday's waterways advisory committee meeting, Keon said the fact that the shoaling in the inlet hampers the Coast Guard's ability to respond to search and rescue missions carries significant weight with the Army Corps and other regulatory agencies, as does the safety of commercial fishing vessels. He was scheduled to discuss the emergency permit request with the conservation commission Wednesday. 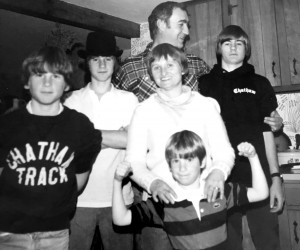