CHATHAM — A regional coalition of bike experts is peddling the possibility of a new bike path that would link Orleans with Chatham using a right-of-way under Eversource high-tension wires.

Currently, pedestrians or cyclists traveling between the two towns either have to travel west all the way to the junction of the Cape Cod Rail Trail and Old Colony Rail Trail in Harwich Center – a detour of almost 18 miles – or risk traveling with cars along dangerous Routes 28 and 39. 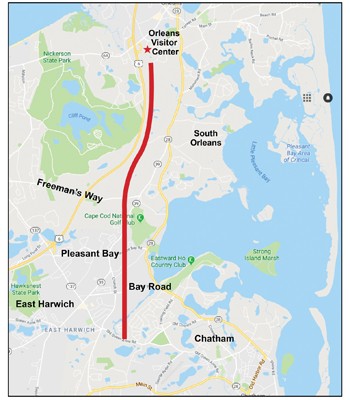 The utility right of way reaches from the visitor center in Orleans south through Brewster and Harwich to the Chatham line at Muddy Creek, following a relatively straight path.

The path under discussion, visible on satellite maps as an almost straight line, starts at the Orleans Visitor Center near Skaket Corners and passes through industrial, agricultural and watershed areas, crossing Freeman’s Way in Brewster by the Captains’ Golf Course, and then heading south and crossing Route 39, Pleasant Bay Road and Bay Road. A future path would either then have to cross Muddy Creek or divert around it before reaching Chatham.

On June 7, bikeways committees from Chatham, Harwich, Brewster and Orleans met to discuss regional planning efforts, and they were joined by Tom Francis, deputy director of the nonprofit group MassBike. He showed a computerized “heat map” published by the fitness app Strava, showing the most popular local bike routes. The map showed that the Cape Cod and Old Colony rail trails are heavily used, but that many bikers are also riding with traffic to get between Chatham and Orleans. He noticed a small stream of riders who regularly use the Eversource right of way, and checked it out on his bike.

“The corridor is actually really nice,” Francis said. “The path along there is great. There are probably some grading issues that would need to be addressed,” he said, since the path is quite steep in some areas. But the unofficial bike path is already being used, he said.

With spurs, the path has the potential to link the Orleans visitor center with the center of South Orleans, recreational and senior living facilities in Brewster, residential neighborhoods in East Harwich, and possibly the beach near Muddy Creek, before connecting to Chatham. If the new path connected with the Cape Cod Rail Trail, “that would be amazing,” Francis said.

“We’re finding that the conservation commissions along the way are pushing back, because they want nothing to change,” Francis said. But while some trees will need to be cut to facilitate this part of the path, “the truth is, Eversource is going to cut down the trees anyway, or they’re going to spray pesticides,” he said.

In fact, if a paved bike path reduces the need for herbicide applications, it might be an attractive proposition for the right of way between Chatham and Orleans, which runs close to Orleans public water supply wells and is close to residential areas in East Harwich. Much of the route is also within the Pleasant Bay watershed.

“There’s a lot of potential there,” Francis said. “And working with Eversource might be easier than taking other paths,” he said.

But the idea of a multi-use path between Chatham and Orleans is no simple matter, since Eversource doesn’t own most of the land in question.

“Roughly 90 percent of our rights within rights-of-way are by private easement, and those rights are specific to our crews and equipment,” Eversource spokesman Michael Durand said. “We don’t have the right to allow public or third-party use of our easements across privately owned land.”

When the Old Colony Rail Trail was created, much of the former railroad bed in Harwich was already owned by the town, part of recreation, conservation and water department land. Though it required a few private property easements, the stretch in Chatham was also mostly located on town-owned property. That project took 20 years to plan and complete.

Durand cautioned against comparing the proposed path in Chatham and Orleans to the one in Western Massachusetts.

“The difference between this and the work in Wayland and Weston for the commonwealth’s multi-use rail trail is the railroad right-of-way corridor is owned entirely by the MBTA,” he said. “The Department of Conservation and Recreation (the proponent of that project) and Eversource both have rights along the MBTA’s corridor,” Durand said.

In the case of the Orleans-to-Chatham stretch, “if such a trail were to be considered for land upon which we have easements, the project proponents would first have to acquire rights from every landowner. If successful, they would then work with us to ensure the project wouldn’t adversely affect our easement rights,” Durand said.

One thing’s clear, Francis said: there is demand for the new bike path. He rode along the right of way until he encountered properties that were fenced off and planted with grass.

“It said ‘private property,’ and they had gone through a lot of work to make it difficult to get in there. And just one property closes that entire section,” Francis said. “I had to go out and ride along 39, and it was uncomfortable.” He encountered a number of other people biking and walking on that roadway, sharing the space with fast-moving cars and trucks. A number of those people appeared to be seasonal workers, he added.

“It’s being used whether you like it or not,” Francis told the bikeways groups. “You should make it into an asset for a lot of people, instead of a small group.”

There’s currently strong state support for bike initiatives, with a number of grant possibilities, Francis added. In some transportation projects, state officials hold photo-ops that are sparsely attended, he said, but the recent event held to mark the opening of the Cape Cod Rail Trail bridges in Yarmouth and Dennis saw giant crowds of supporters.

“People from all over the state came to see this,” and Gov. Charlie Baker, who officiated at the ceremony, and took note of that fact, Francis said.

The key to building support for bike trail projects is to build a broad constituency, he said.

“A lot of selectboards think that it’s a giveaway to a small slice of weekend warriors who wear Spandex and clog up the road when they’re exercising,” Francis said. “And there’s some truth to that.” But there are bicycles in almost every garage and garden shed, with owners who simply don’t like riding in busy traffic. “If they’re not using them, it’s probably because they’re uncomfortable,” he said.