Thanks to an almost total communications outage in Puerto Rico and the Virgin Islands, the full extent of the damage caused by back-to-back hurricanes Irma and Maria remains unknown. For scores of Lower Cape residents waiting to hear from friends and loved ones there, that means more heartache and helplessness.

Ignacio Mortell of Chatham, who grew up in San Juan, is grateful to have heard that his parents are safe in a hotel that has running water, though no electricity or telephone service. Mortell knows that his parents, Ivan and Estela Doval, are in far better circumstances than many people on the island who have lost their homes and belongings, but he is eager to evacuate them to the mainland. 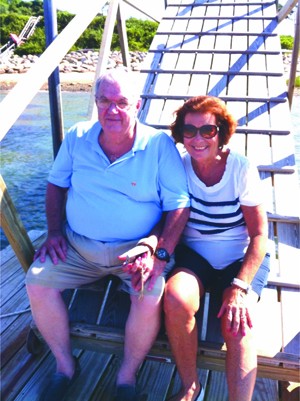 Ignacio Mortell of Chatham is trying in vain to evacuate his parents, Ivan and Estela Doval, from Puerto Rico. They are pictured here during a recent visit to Chatham. COURTESY PHOTO

“I haven't heard anything new regarding the airport,” he said. The airport in San Juan remains mostly out of commission, and it could be many days before regular commercial flights are available again.

According to the reports emerging from the area, the situation on the ground is increasingly desperate because the only electricity since the storm has come from generators. “The diesel has run out,” Mortell said. Fuel remains in extremely short supply, and even hospitals and other key facilities are running out. Officials worry that the 3.5 million people on the island, mostly American citizens, will soon be at the center of a humanitarian crisis. Mortell has an aunt, a cousin and other relatives who live on the west side of the island and has had no word about their safety.

“You want to do as much as you can,” he said. To that end, Mortell has recruited help from a number of Chatham friends and is organizing a collection of clothes, hygiene supplies, medicine and other essential goods to be shipped to the island as soon as possible. The Chatham Orpheum Theater is a donation drop-off site, and the collected items will be delivered to the San Juan area. The supplies will be delivered to his alma mater, the Academy of Our Lady of Perpetual Help, where volunteers will distribute them.

“Our goal is that the aid gets to where it needs to, directly,” he said. There is also a desperate need for cash donations, since the only retailers remaining in operation in Puerto Rico are only accepting cash. Wiring cash electronically is a challenge because most banks remain closed, Mortell said.

Valerie Mowbray and Steven Nickerson of Chatham spent days without any word from their daughter, Moira Nickerson, who lives on the island of Vieques. Moira and her boyfriend, Ben Elliott, had the opportunity to evacuate the island before Maria struck, but chose not to do so. 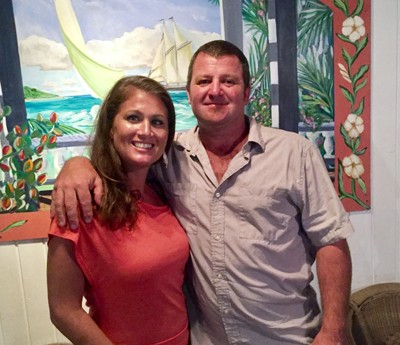 Moria Nickerson and Ben Elliott are reportedly safe on the island of Vieques. COURTESY PHOTO

“They're very invested in the community. It is what they consider home,” Mowbray said. They also take care of many stray dogs and cats, and Elliott is a construction worker who takes care of a number of properties on the island. As young, strong people, they wanted to help with the relief effort. “They just felt it was their obligation, of course, but it's also where their heart is,” she said. They took shelter in one of the houses that Elliott takes care of, and were talking by phone with the house's owner early Wednesday morning when the line went dead. At last report, they were sheltering in a bathroom and the house appeared to be holding together.

Mowbray and Nickerson heard nothing from their daughter until Monday afternoon, when he received a call from a stranger, forwarding an audio file recorded by someone at the San Juan airport. In the recording, the speaker reads a note from Moira, indicating that they are safe and comfortable. Speaking Tuesday morning, Mowbray sounded understandably relieved.

“I had my first good night's sleep in awhile last night,” she said.

Vieques, which is a bit smaller than Martha's Vineyard, is even more isolated than the main island of Puerto Rico. “They're oftentimes the last in line to get help, especially since the mainland is so devastated,” Mowbray said. Mowbray, who lives in New Hampshire, urged people to contribute to an online fundraising site, www.GoFundMe.com/ViequesLove, which is already halfway to its goal of raising $500,000 for relief efforts on the island. She has also been calling her congressman and senators to urge them not to forget Vieques when FEMA assistance is distributed.

The U.S. Navy used the island as a bombing range for many years, she noted, and it's time for the federal government to lend assistance.

“It seems like the right thing to do,” she said.

Though Vieques has a small airport, most of its supplies come by ferry. One of the main ferry operators to the island is East Island Excursion, which runs a small fleet of boats from Fajardo, on Puerto Rico's east coast. The company is operated by Steve and Jayanne McLaughlin; Steve's late father, Don, was a longtime South Orleans resident, and in his youth, Steve was a dockhand at Saquatucket Harbor. 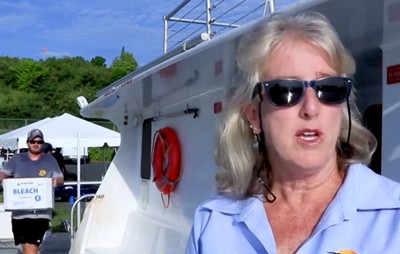 Jayanne McLaughlin, who has family in South Orleans, runs a key ferry service between Puerto Rico and Vieques. She is pictured here in a Sept. 15 video recruiting donations for a relief trip for hurricane victims in the Virgin Islands. VIA FACEBOOK

Former Harbormaster Tom Leach communicates with the McLaughlins regularly by Facebook, and said there are unconfirmed reports that the two are safe. In their last online posts just before the storm hit, they reported that winds were gusting to 115mph. It is unclear what remains of their fleet of three ferries and the two large catamarans they use for charter trips.

Before Maria struck, the McLaughlins were using their ferries to shuttle relief supplies to the Virgin Islands, which had just been battered by Hurricane Irma. Now, it is Puerto Rico's turn to receive help. With most phone service out and predictions that it could take many months to restore electrical service, “they're in big trouble,” Leach said.

Cape Air, founded by Dan Wolf of Harwich, provides commercial flights between San Juan, Vieques, and various islands in the U.S. and British Virgin Islands. Vice President Trish Lorino said the company is seeking to resume flights as soon as possible, but its primary concern is the 160 employees who live in the disaster area.

“We're a family here,” she said, and making sure Cape Air employees can get back to work soon will help in their recovery, Lorino said. While some employees report only minor damage to their homes, others have lost their homes or belongings. “It really runs the gamut,” she said. “Because the communication is so sporadic, it's hard to get a good gauge on how truly devastating it is.”

The company is assessing the state of airports in the region, starting with their hub at San Juan.

“They have commercial flights going in and out, but on a very, very limited basis,” she said. There is also a curfew in the city. The airports in the British and U.S. Virgin Islands are also in tough shape following Maria, “and even prior to Maria, they were so impacted by Irma,” she said.

Prior to Irma's landfall, Cape Air sent satellite phones to its various locations and dispatched a member of its information technology staff to San Juan to work on restoring radio and internet connectivity “to the best that they can, knowing that the infrastructure there is very damaged.”

The ultimate goal is to resume commercial flights, “but prior to that, when we can, to do some possible relief flights,” she said. “The key is trying to get things to San Juan.”

Working with the Chatham Merchants' Association and the chamber of commerce, resident Mandy Alten has been collecting new T-shirts and gift cards to be sent to the Virgin Islands Relief Foundation. A number of local stores have already donated T-shirts, and organizers are also seeking cash donations to defray the cost of shipping.

In partnership with the Florida Sheriffs' Association and Barnstable County Sheriff James Cummings, the Harwich, Orleans and Brewster police stations are accepting donations of relief supplies to be sent to victims of Hurricane Irma in Florida. Specifically needed are cases of water, hygiene and cleaning supplies, pet supplies, gift cards and household items. Donations will be accepted through Oct. 6.

The local pop band “The Impermanents” will perform a concert on Oct. 21 at 6:30 p.m. at First Parish Brewster, 1969 Route 6A, to raise funds for hurricane relief. A suggested donation of $15 or $20 will be accepted at the door.