Everything squeezes onto the Monomoy National Wildlife Refuge's 23-foot Parker for a choppy 20-minute, seven-mile ride down the west side of South Monomoy Island, landing just north of the Powder Hole, where a big blue sign announces the Lighthouse Boat Landing. After a quarter mile trek over a sandy path flanked by thick groves of poison ivy, we arrive at our destination.

Built in 1849, Monomoy Point Lighthouse was one of the first lighthouse towers to be made of cast iron. Today the 40-foot-tall lighthouse and the keeper's house are the only structures still standing on Monomoy, where a village once thrived and beach shacks were common until just a few decades ago. Since last Monday, a rotating crew of Fish and Wildlife personnel and volunteers have been busy renovating the keeper's house to ensure its continued preservation.

“In the future we really want to open this up to people for tours,” said Monomoy Refuge Manager Matthew Hillman. The structure has been closed to the public for years but is used by the refuge's bird monitors as a base of operation from April to August and by scientists researching the local seal population during the winter, but the lack of heat – and interior walls – as well as safe stairs make the accommodations somewhat primitive and difficult in the island's harsh environment.

The current project will change that. Last week the finishing touches were being put on a new deck, and the electricians were installing wiring that will be connected to a bank of batteries powered by a new solar array. The insulation hauled over last week will go up behind drywall that was airlifted to the island, along with lumber, generators and other tools, last May by a Coast Guard helicopter.

The project has four goals, Hillman said. First is to make the keeper's house – which, along with the light tower, is listed on the National Register of Historic Places – safe and tight to the weather and restore its original appearance. Insulation and basic heat via electric baseboard heaters will help keep the structure dry against the barrier island's dampness and near-constant wind.

The work will also make the structure safer for those who use it, improve operating efficiency, and eventually allow the public access to an important historical resource, Hillman said.

In 2010, the lighthouse tower was painted and some structural improvements made, Hillman said. The same year foundation work was done on the keeper's house to stabilize the structure; the existing deck, which had become dangerous, was removed, a new roof and shingles were installed and the interior was gutted. But then the money ran out.

May's airlift brought 30,000 pounds of building supplies to the site, which Hillman said would have been next to impossible to do otherwise. As it is, additional material, such as those brought over last Thursday, as well as food and water has to be transported by boat and then hand-carried overland to the lighthouse, which sits near the middle of the island. A hand cart with beach tires designed to be gentle on the environment, which the crews had planned to use, was stolen along with one of the refuge's skiffs, Hillman said.

Building materials and supplies for the current work cost $34,000, while the Friends of the Monomoy National Wildlife Refuge contributed $4,000 to cover the cost of wiring, lighting drywall and other interior materials. Glynn Electric of Plymouth is donating labor as well as a new solar array, which will replace older, less efficient panels now standing on the south side of the keeper's house.

“This couldn't be done without them,” Hillman said of the company.

Since the refuge only has three full-time staff members, the project enlisted the Fish and Wildlife Service's Maintenance Action Team (MAT), staff members from other refuges who lend a hand on construction, habitat restoration and other projects throughout the Northeast Region.

“It cuts down on the cost of contractors,” said Dave Miller, on loan to Monomoy from the Great Swamp National Wildlife Refuge in New Jersey. “It's a little extra we do as part of our job.”

Participating on the MAT teams allows members to see refuges they might not otherwise visit. Neither Miller nor MAT team member Jess Mihatov of Wallkill River Refuge in New Jersey had ever been to the Monomoy refuge. Both were impressed by its beauty as well as the fishing.

“We're catching fish, so it's worth it,” said Miller.

Also working on the project last week were two members of Team Rubicon, formed in 2010 by veterans to help the Haiti earthquake recovery effort. The California-based organization now sends volunteers on disaster relief missions as well as help various nonprofit and government projects.

“It's a chance to stay in a lighthouse. Isn't that everyone's dream?” said Peter Gould of Concord, N.H. A 30-year Army veteran, he's worked with Team Rubicon for four years and said the work was “just another way to serve the country.”
“I can easily see spending a summer out here, or even a winter,” he said of Monomoy.

“It's definitely a cool experience,” said Rick Hammond who, along with Bryan Lambert from Glynn Electric, was running wire into outlet boxes fastened to the antique timber frames in the building's cramped upper floor.

The volunteer involvement makes it possible to do the project within the two-week timeframe, said Hillman. “We're really fortunate to have some passionate people,” he said. The deck, wiring and much of the interior work was expected to be completed by Friday.

The renovations will be “as historic as possible,” Hillman said. The deck replacing an existing one, although it is being built out of ipe, a Brazilian hardwood, not the local timber it would have been made of originally. While there will be heat, it won't be via woodstove, which is the way the station's crews would have warmed themselves in the 19th and early 20th centuries. But the “modest heat,” which Hillman said will be kept at around 50 degrees during the colder months, will be most welcome by the scientists from the Massachusetts Institute of Technology and The National Oceanic and Atmospheric Agency who use the keeper's house as a base of operations while doing seal research in the winter. “They're probably more happy than anyone else,” he said.

Hillman set up a time lapse camera to take photos every five minutes to document the project which will eventually be posted on the refuge's Facebook page. The refuge's comprehensive conservation plan calls for eventually hiring a concessionaire to run scheduled boat trips to the lighthouse.

“Any way we can get people to the refuge to appreciate the wildlife and these structures, that's a double win for us,” he said. 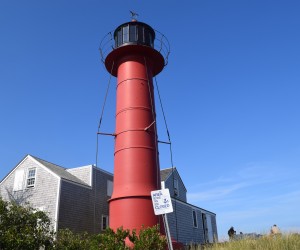 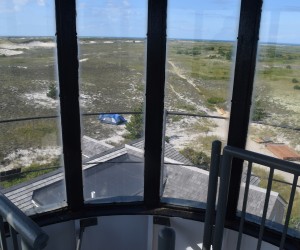 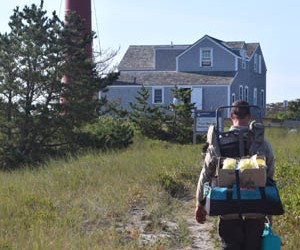 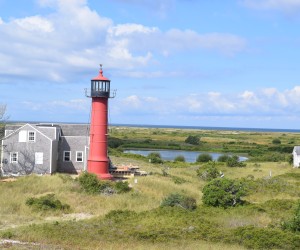 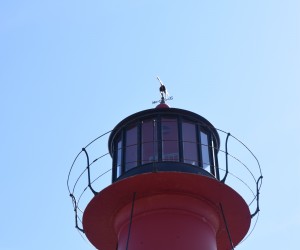 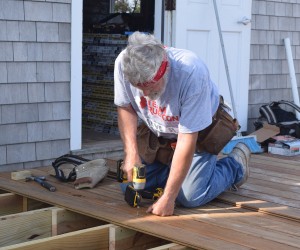 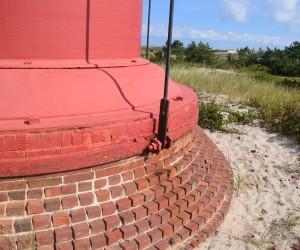 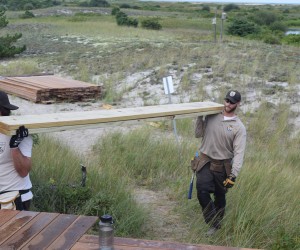 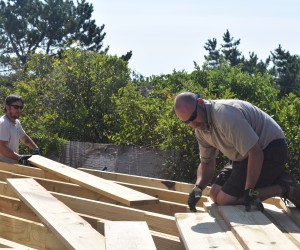