CHATHAM – You aren't likely to see it going 88 miles per hour down Main Street, but a 1982 DeLorean is taking many people in town back in time this week.

The car, a reproduction of the time machine in the 1985 film “Back to the Future,” is in town as part of in a series of fundraisers centered on the popular movie trilogy benefiting the Michael J. Fox Foundation for Parkinson's Research.

A near-exact copy of the vehicle used in the films – right down to the “Outatime” California license plate – the car is the creation of Oliver and Terry Holler of Myrtle Beach, S.C., and grew out their love for the film. Oliver said it took about three and a half months working day and night to duplicate the vehicle, right down to the flux capacitor and the old-fashion alarm clock on the dash.

“It was a bucket list kind of thing,” he said.

Holler used scrap metal, surplus electronics and whatever else he could find to mimic the original time machine, going solely by what he could see when he paused a VHS tape of the movie.

“Everybody thinks we had blueprints, but the only source was the movie, and it was only available on VHS,” he said.

“It was a lot of fun,” he said of building the time machine. “I compare it to the movie 'Field of Dreams,” when Kevin Costner is absorbed with building the baseball field. That's how it was with this project.”

They realized they were onto something when they drove the DeLorean down the road and people waved, clapped and snapped photos.

“We knew we were big fans of 'Back to the Future,'” he said. “What we didn't know was that the rest of the world was too.”

About the same time they were wondering how to use the time machine for good, “Back to the Future” star Michael J. Fox was putting together his foundation to fund researching into Parkinson's disease. They joined as volunteers, and whenever anyone asked about taking photos of the time machine, they asked for a donation.

The couple comes from a theater background and owned their own theater in Myrtle Beach for about 10 years. Eventually, “we realized we were spending more time 'time traveling' than with our theater,” Holler said. They closed the theater in 2012 and began touring with the DeLorean, paying the bills by doing corporate functions and spending the rest of the time doing benefits like the one in Chatham this week. The car has also been used in numerous commercials and promotional films.

While they don't generally do car shows, it was at the Celebration, Fla., Exotic Car Festival that they met its organizer, Jeff Ippolito, who now owns the Chatham Inn at 359 Main, where the Delorean will be headquartered this week.

And yes, the car is “road ready and legal,” Holler said. The couple has taken it to all 50 states and logged some 600,000 miles over the last decade or so. “We've actually had the car serviced in Japan,” he said. It's been upgraded during that time; the digital time readout was originally fixed plastic numbers with a light behind them. Now it's an LED readout with that can be programmed to any date and time. Kids especially like the idea of setting it to travel back in time to their birthday, he said.

The car's fusion reactor has also gone through several generators. Unlike in the movie, where “Doc” Brown returns from the future with a “Mr. Fusion” reactor, Holler has labeled his reactor “Mr. Compassion.” When a donation is placed inside, it plays a line from the movie, such as Brown's catchphrase, “Great Scott!” 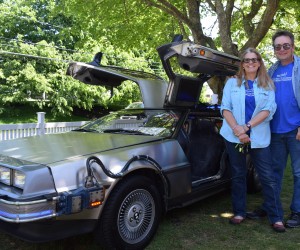 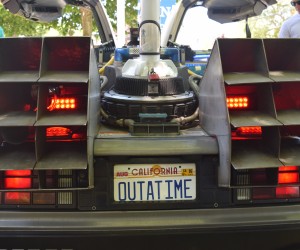 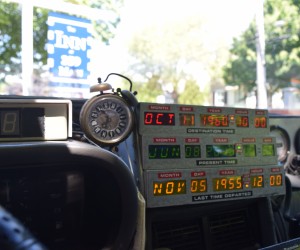